In the past there has been much confusion over the terms “Amplitude Modulation” and “Beats”. After writing two research papers1, 2 on nonlinear vibrations I can sympathize with this confusion. In this short note I hope to present an explanation of the terminology that will lead to clear thinking on the subject.

In a linear system, Figure 1, the principal response to a vibratory force has the same frequency and shape. Figure 1 contains sinusoidal vibration data from an unbalanced generator. The spectrum shows generator pedestal operating speed vibration with a single peak at 60 Hz. The time waveform is sinusoidal with an amplitude of 0.35 IPS and period of 16.6 milliseconds. 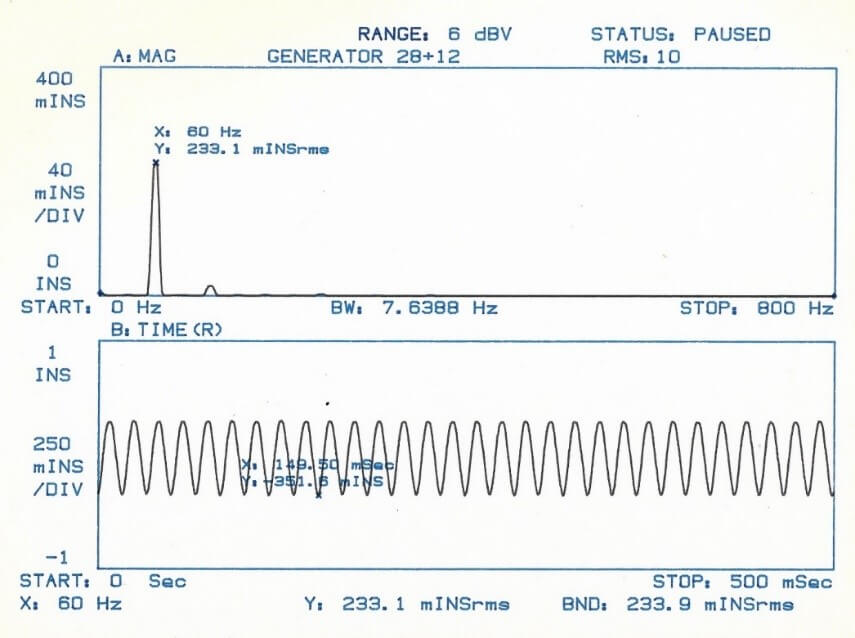 When two forcing functions are present in a machine two principal frequencies will be shown in the spectrum. The vibrations from the two sources vectorially add causing a beat, Figure 2, in the time waveform yielding a periodically varying amplitude. In addition, a natural frequency in combination with a forced vibration may cause beats yielding two frequency components in the spectrum. 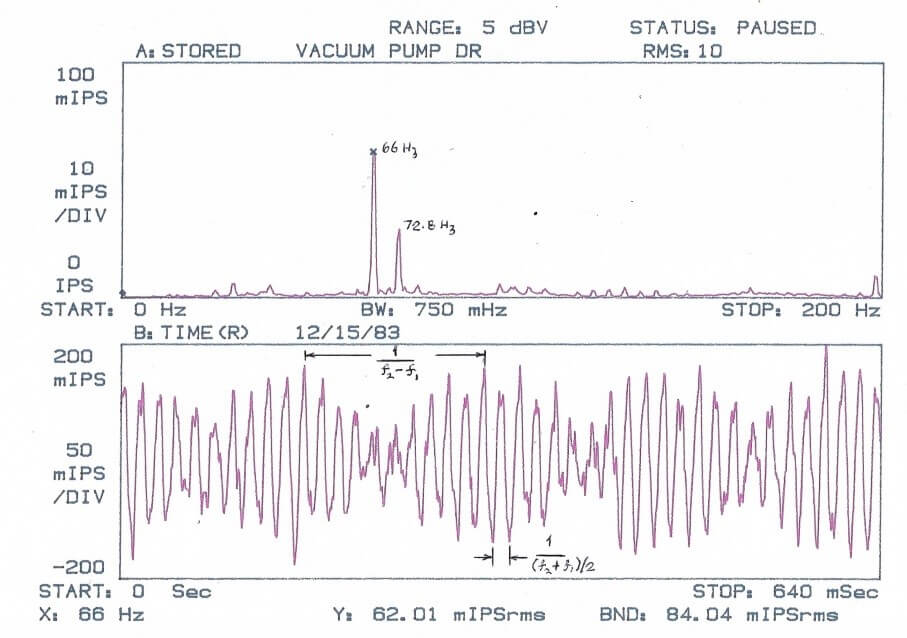 In the time waveform traditional beats will contain a high frequency vibration termed the carrier with amplitude bounded by the beat. The carrier will have a period of one over the sum of the beating frequencies divided by two (Figure 2). The carrier will be bounded by a low frequency periodic vibration that has a period of one over the difference of the frequencies of the two beating vibrations. The spectrum will contain the actual two beating frequencies. Figure 2 shows a classic beat signal measured on a cavitating vacuum pump caused by a vane passing force (66 Hz) beating with an adjacent vacuum pump vane pass force (72.8 Hz). Note the symmetry of the time waveform. Each beat cycle goes to a plus and minus of almost equal amplitude. This signal has almost no truncation.

The first fact to recognize is Amplitude Modulation and Beats are not co-equal terms. So, they should not be mentioned with equal importance- like “either or”. Amplitude modulation is a generic condition normally related to any signal that has a clipped or truncated amplitude caused by a boundary condition such as misalignment, nonlinear support stiffness, looseness, and/or rubs. Amplitude modulation takes many forms from sinusoidal to random noise alteration. It can alter the natural linear magnitude of any signal whether it be a single sinusoidal forced vibration or a signal from a machine subject to two or more forced vibrations simultaneously. Clipping (truncation) of a signal causes sum and difference frequencies to appear in the spectrum.

Figure 3 is an example of an amplitude modulated signal from a single forcing function. It is from a barred calender roll yielding a vibration every time a bar goes through the nip (number of bars X roll speed). Since the sidebands are 8Hz (480 RPM) and the center frequency is 58 Hz then the number of bars must be close to 58/8 = 7.25 or 7 bars. 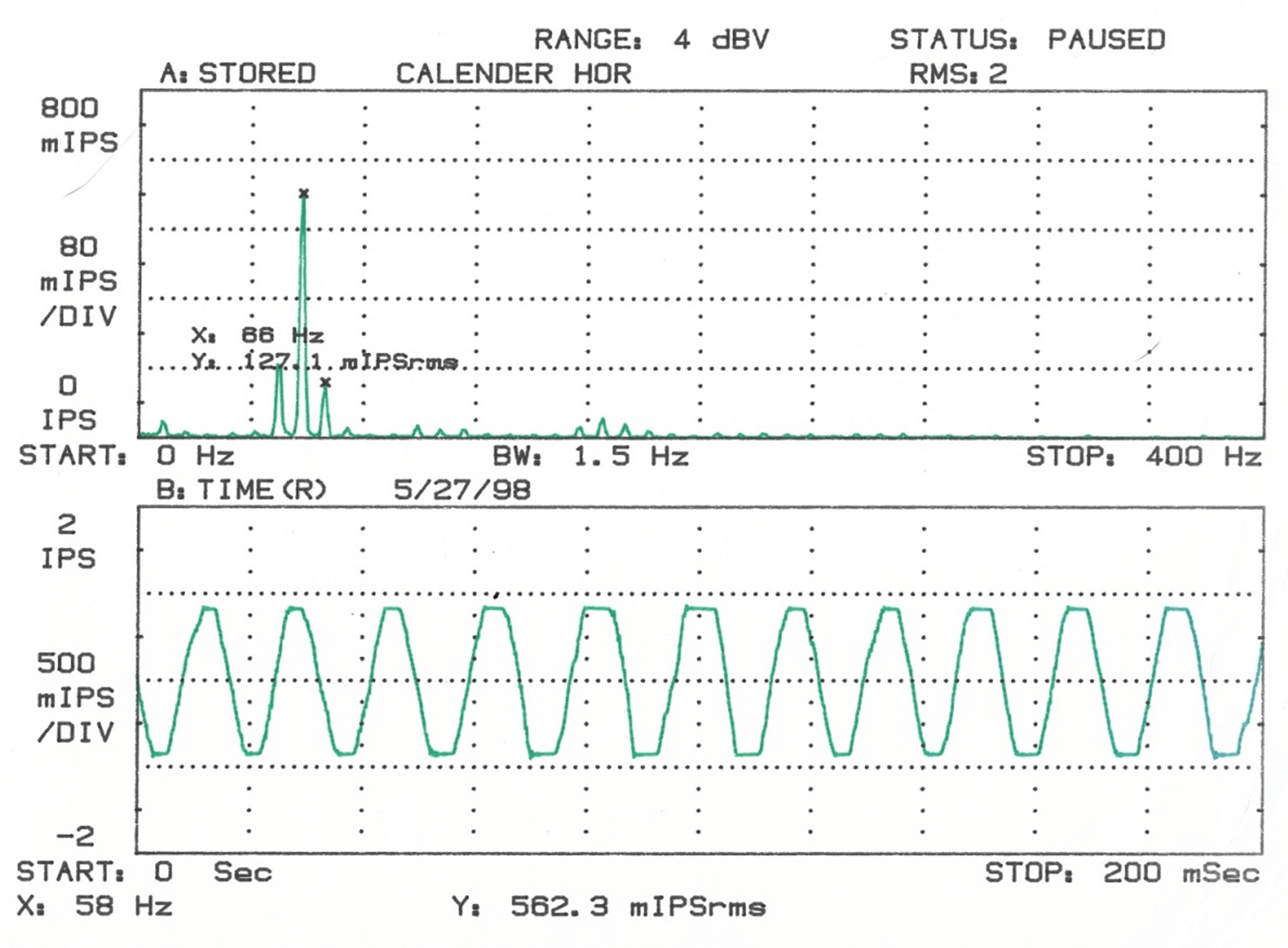 Figure 3 Signal Truncation from a Barred Set of Rolls

Either the signal from the single forcing function or a beat signal can be amplitude modulated- sometimes called clipping or truncation. Sum and difference frequencies will be present around the principal exciting frequencies, Figure 3. Beats as well as a single forced vibration can be amplitude modulated. Depending on the mechanism, clipping can modify both the upper and/or lower side of the signal.

Figure 4 is an amplitude modulated beat showing not only the two exciters but also sum and difference frequencies in the spectrum. The data are from the inlet piping of a steam turbine. The pipe hangers constrain the vibration in one direction causing truncation of the signal. 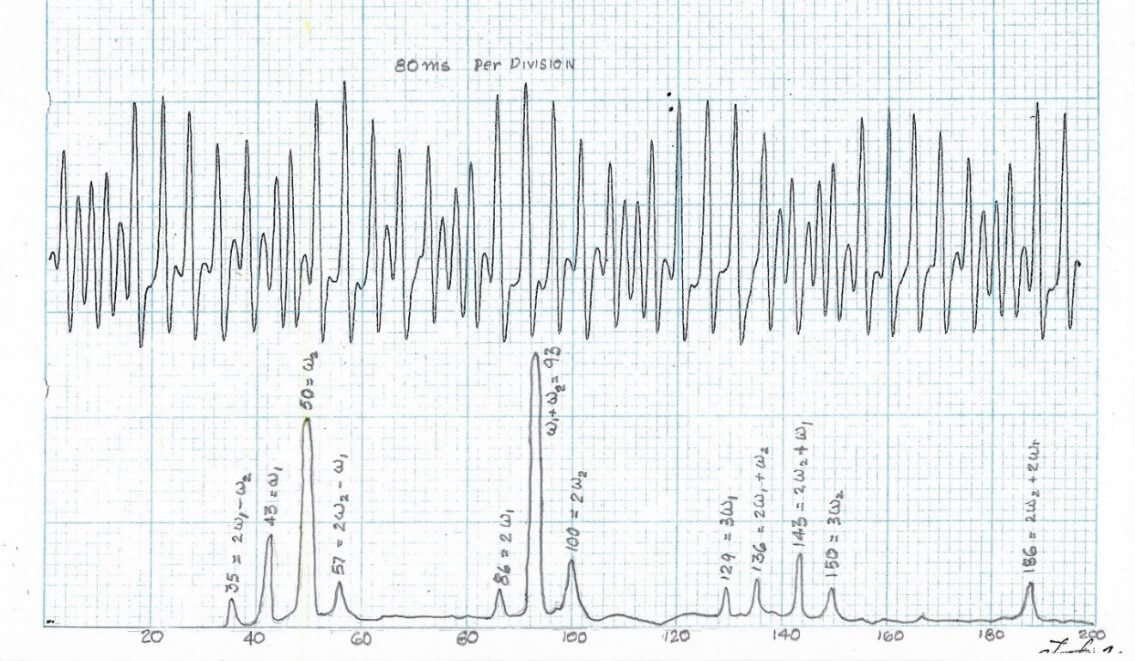 Note the classical truncated beat waveform shown in the time domain signal. The turbine is operating at 3,000 RPM yielding a once-per-rev vibration due to mass unbalance at 50 Hz, Figure 4.  Since the source of the second component of the beat was unknown it had to be obtained from the time domain record. The beat period is 0.143 seconds (7 Hz), that being the difference frequency strongly suggests the second frequency is 43 Hz. The period of the sum of 50 Hz and 43 Hz divided by two, the high frequency carrier (ω2 + ω1)/2, was 0.0215 seconds.

The Table contains a list of some frequently encountered carriers (forced vibrations) and modulators although some of the modulators can be forced vibrations. In addition, natural frequencies rung by impacts in the system can act independently or for beats with another forcing function.

An Analysis of the Different Aspects of Intelligence in Machines

© 2020 The Vibration Institute  |  All Rights Reserved